Bullshit memes #2: The UFO landing on the Sphinx

This is another Facebook perennial that I am going to explain for those who are interested in clear answers and good old fashioned evidence, but are not necessarily versed in Near Eastern iconography, in this case ancient Egyptian symbolism.

Those who love a good fantasy story over evidence and don’t mind clickbait pseudo sites, may leave this blog post ASAP, as there is, realistically, nothing here that you want to see.

So, back to topic … There is an image that does the rounds on the fringe archaeology groups that claims an ancient Egyptian papyrus shows evidence of a UFO landing on the Sphinx.  It is all over the web on sites like Ancient Code, Not from Earth org, Today’s Alternative News and probably every other ramped up clickbait news source touting conspiracy theories and Bigfoot stories. 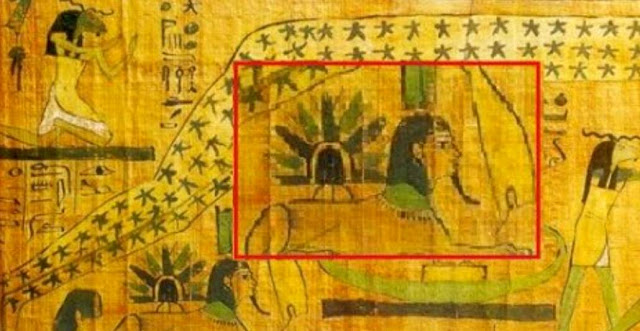 
As usual for these outfits, they all seem to be providing watered down versions of a claim by a gentleman going by the name of Wayne Herschel who has published a book on this topic.  Although to be honest, I would be surprised if that theory is worthy of an entire book, but hey … I bet he thought of lots of stuff to make up and lots of people will buy it both literally and figuratively … because … aliens.

However, on the other hand, Egyptologists tooling around the web are looking at this image, murttering arcane expletives and moving on, because for someone who has dabbled in ancient Egyptian symbolism it is self evident what the papyrus shows:  it is a fan.

In fact, this image from the papyrus is a very good example of the phenomenon apophenia (subjective thinking when viewing images) that also, as usual, has a very hefty dose of cultural ignorance.  This technique is incidentally very important if you are in this for the snake oil selling.  Accuracy would ruin everything.

So first of all, let’s have some basic information, because once you have key words you can look this stuff up yourself to confirm my statements.

Detail from the papyrus of Djedkhonsuiuefankh I.  Image Piankoff and Rambova 1957, plate 19.

The image source
The papyrus belonged to Djedkhonsuiuefankh I (Dd xnsw iw=f anx), a priest of Amen and father of the god (Thoth), who probably lived in the 11th or 10th century (1060-940 BCE).  This date is relatively late, being after the famous kings like Ramesses II or Tutankhamen.  Instead, it is in the rather unstable 21st Dynasty during the Third Intermediate Period when mythological papyri were all the rage (less text, more pictures).

The papyrus itself is in the , but will have originally come from this priest’s tomb.  It is a funerary text designed to guarantee the dead man a proper afterlife.  All the imagery on a funerary papyrus is a compliment to the process described in the text, because the whole thing exists as a magical machine to allow the dead man regeneration in the next world among the gods.  There is no historical factor to a funerary papyrus, so they are unlikely to slip in an account of seeing a flying saucer land on the sphinx … really.

The section of the papyrus with said flying saucer shows the goddess of the sky Nut stretched out over a divine boat containing the soul bird, the ba.  On the right of this boat Nut’s father Shu (air) holds her up away from her partner Geb (earth).  The sphinx is tucked into the left corner under Nut’s legs and has the king’s white crown in front of it and a royal wig behind.  Above the sphinx is a shrine representing the necropolis, or place of the dead.  The ‘UFO’ is upon his back.

Detail from the papyrus of Djedkhonsuiuefankh I. Image Wikipedia

The accompanying text states: ‘Osiris, priest of Amen, Djedkhonsu, the justified one in the Netherworld'.

So this is basically where context is very important.  You can’t just take a single frame from an image and jump to conclusions, ignoring all the parts that make up the whole, like text and other visual elements.  The entire scene dictates the meaning and the sphinx here is part of the magical spell.  It likely represents the dead man as Osiris in the Netherworld (the necropolis) during the night, or just before the moment of dawn.

At dawn the deceased transforms into the sun god Re as the soul bird in the boat and sails through the heavens (over the body of Nut) during the day.   To make sure the message is absolutely clear, the ba bird on the papyrus is captioned: ‘Re, he rests in life’.

So a few things are obvious, it is not an image of the Sphinx ( pyramids), it is a magical sphinx. Although the placement below a necropolis shrine could infer it is a statue associated with the tomb.  But this still makes it a solar symbol associated with the dead man and it incidentally infers that the UFO is impressively small.

Symbol or statue, the scene in this papyrus is just one component in a magical process.  It represents the Egyptian idea of the perpetual cycle of the universe.  After they died all Egyptians wished to be justified, that is to live at night in the realm of the dead as Osiris and then to be reborn like the sun from the body of Nut in the morning and to travel in the sun god’s boat through the heavens every day … for ever (it was probably quite crowded).

The UFO
In the original article on CNN: iReport, and for that matter, in all the other copycat pieces, the writers claim that this papyrus shows evidence of the ‘ship of Ra landing on the sphinx’.  Or they claim it shows ‘a disc-shaped object emitting coloured bright light and landing on top of a sphinx’.

This rationale only works under three circumstances; 1) you are not fussed about scale.  2) you are aware of how a flying saucer looks specifically from old American and horror movies, which is incidentally the only way you might have an opinion about a flying saucer, because they are a modern myth.

And more importantly; 3) this rationale only works if you only know the bare basics of ancient Egyptian symbolism, because human beings have an infinite capacity for imagination and if you want to understand ancient symbolism, you have to understand their mindset, not ours.

The fan
In fact the ‘disc-shaped’ spaceship is the semi-circular support that is designed for attaching ostrich feathers to a fan.  What these articles describe as the ‘bright light’ radiating from the UFO is these different coloured ostrich feathers. The object in fact has no depth, it is flat and viewed from the front.

The flying saucer’s tripod legs are actually two related things, the vertical handle that is attached to the fan in the centre and a simplified papyrus flower.  Here this flower is drawn as a single curved line.  It is only incidental that the ends of the papyrus touch the sphinx’s body in the drawing.

The sphinx with a fan motif was ubiquitous to Egyptian royal imagery, particularly during and after the .  The sphinx may be reclining like the one on this papyrus or it may be represented trampling the traditional enemies of .  In most cases it is a visual metaphor for the king, because that was his job, representing the living sun god, conquering the forces of disorder and by this maintaining universal harmony. 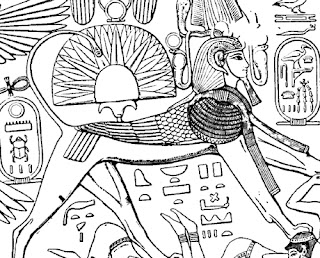 Thutmose IV as a sphinx from his silver chariot. Tomb of Thutmose IV.
Image Carter and Newberry 1904, plate XI.

How the scene of a sphinx with a fan was depicted in ancient was flexible and depended on medium, period and naturally on realism.  Because these royal fans existed.  The position of fanbearer to the king was very prestigious and fans were decorated with precious materials, different designs and the feathers were dyed in different ways.  Although dark blue and light blue were preferred colours, and this papyrus is no exception, as the feathers are alternatively dark blue and light blue.

Left: The god Monthu as hieracosphinx from a funerary boat. Tomb of Amenhotep II.

Right: Tutankhamen as a sphinx from a chariot harness plaque. Tomb of Tutankhamen.
Illustrations A. Sinclair.

Perhaps the most interesting thing about this small sphinx and fan drawing is the use of royal solar symbolism (crown, wig, fan, sphinx) to represent the dead man and his necropolis in a mythological scene on a funerary papyrus.  But this may simply be related to the period.  Because the 21st Dynasty is known for uniting royal power with priestly offices.

What the scene from Djedkhonsuiuefankh's papyrus definitely is not, however, is evidence of a UFO with tripod legs landing on a sphinx, or the Giza Sphinx … whatever... in around 1000 BCE. 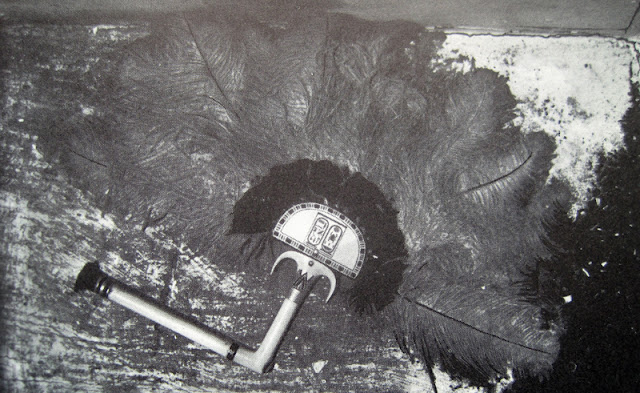 Afterword
On showing the UFO image to my partner and explaining the kerfuffle to him, because astonishingly he had never seen it, his response was:

‘that’s not a UFO, it is clearly a mobile police lamp and the sphinx is rushing to the scene of a crime’ … I’ll buy that … basically about as much as I’d buy the UFO story.

Because both responses are dependant on subjective experience.

But I quite like the idea of the sphinx with siren blazing chasing after criminals.

References
Papyrus of Djedkhonsuiuefankh I
A. Piankoff and N. Rambova 1957.  The Mythological Papyri. Bollingen Series XL.