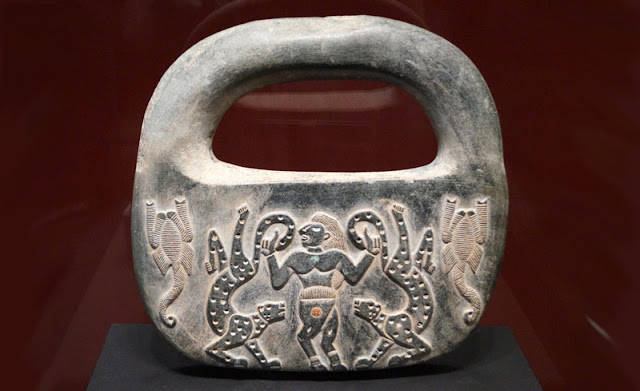 Or how some people really can’t see past their own subjective experience, and will buy any old tat because it looks cool and often has mysterious in the title.

Yes I just did that. 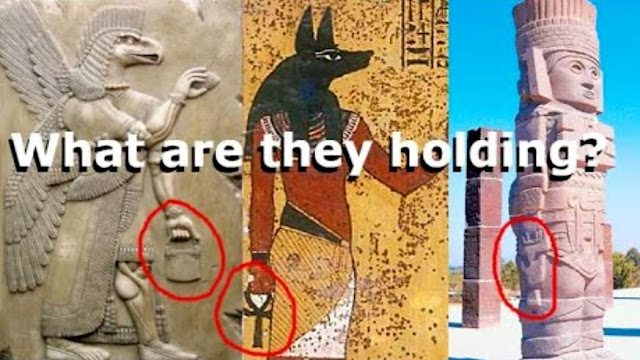 The answer is ‘completely different objects’.

Left.  This Neo-Assyrian (1st millennium, 9th century BC) relief from Iraq has a winged protective Apkallu divinity who is holding a ritual bucket filled with a libation liquid.  The image is a two dimensional interpretation of a circular bucket with a handle that is viewed in profile.  The pine cone he holds is dipped into it, so that he can sprinkle the liquid.

Middle.  The jackal headed figure is the Egyptian god of mummification Anubis from a wall in the burial chamber of Tutankhamen’s tomb (2nd mill., 14th century BC).  He is holding an amulet, the symbol of life, the ankh, that is really not in any known universe a bucket, or a handbag.  Egyptian gods carried life in their hands and confered it on kings, particularly the dead ones.

Right.  The Meso-American Toltec warrior (10th to 12th century AD), is from the pyramid of the Toltec creator and chief god Quetzacoatl at Tula in Mexico.  The figure holds something specific to his warrior status and his culture that resembles neither of the other objects.  It is a weapon. 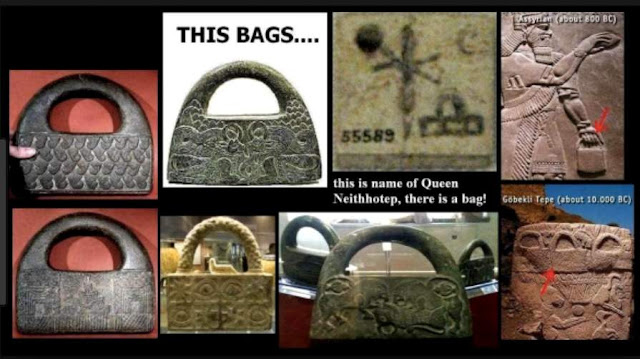 More ‘bags’:  This is a classic.. although I would recommend next time they check for grammar issues before pressing post.

Left.  Most of the objects (5) on the left are chlorite weights of some description from eastern Iran and dated to the middle of the 3rd millennium BC (ca 2500 BC).  We tend to call them weights these days, because they have wear marks on their 'handles', probably due to tying with rope and hanging in some capacity, perhaps as a weight that could hold down a covering.  They are flattish and superficially two dimensional with no ‘bagginess’ at all, like say the capacity to carry stuff.

Centre top.  Is a poor photo of an ivory label with the 1st Dynasty Egypt (late 4th mill. BC) naming queen Neithhotep in hieroglyphs.  However, their ‘bag’ hieroglyph, ‘hotep’, is in fact a line drawing of a reed mat with a loaf of offering bread placed in the centre, that is drawn viewed in profile.  No bag to be seen.  This is not even a particularly ambiguous hieroglyph.  There is royal art where you can see the woven pattern of the mat.  The other hieroglyph is incidentally a shield with two arrows.

Top right.  The Neo-Assyrian (1st mill.) divinity is again holding a ritual bucket used for libation liquids in scenes with sacred trees.  These buckets actually exist btw, or something very similar, the Louvre has a couple made from faience from Mari in Syria, although they are about 500 years older than the Assyrian ones.

Bottom right.  Is on a pillar from Göbeckli Tepe in south-eastern Turkey, (10th to 8th mill. BC). Considering how very very early and schematised these carvings are, archaeologists can only make educated guesses about the significance of their icons, which existed more than 6000 years before any language was written down.  Because these things are a schematised loop and a rectangle carved in relatively flat relief, it is not possible to say how they are meant to be viewed.  Should we assume drawn looking down from the top? In profile?  Or like the ancient Egyptians, with all the important bits put together?  Is it three separate objects, or one long one?  Pretty safe to assume they are not handbags.

There is in fact no way to argue a connection between a sculpture from 9000 BC and objects from the 3500 BCE to the 1st millennia AD unless you don’t require any evidence at all to believe stuff. 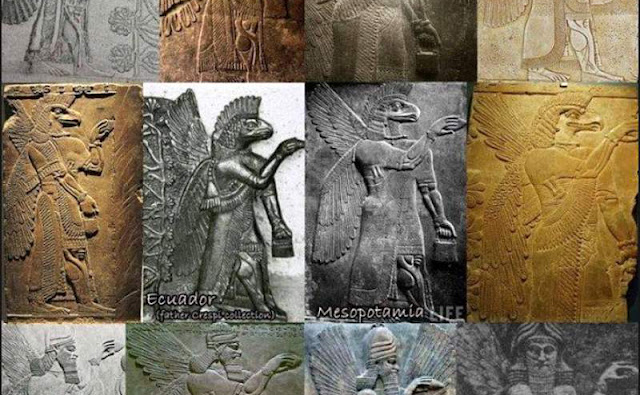 The final image is a children’s game: called ‘one of these is not like the others’.

Can you spot the modern fake?  I’ll give you a clue: it is not from Neo-Assyrian Iraq.

All three internet memes illustrate how foolish it is to use modern words like ‘handbag’ and subjective reasoning to read ancient art.  Ignorance of the physical context and artistic conventions of early cultures combined with narrow interpretation of two dimensional images could quite possibly make you look like a git on the internet.

Also, the use of culturally specific modern English nouns for academic writing and the media to describe ancient artefacts is completely bogus and can inadvertently deceive the reader, or facilitate the deception of the public by pseudo-science websites.  This meme fad basically could have begun because of misinterpretation of the word handbag to describe the chlorite ‘weights’ from Iran (or, at a stretch, a troll thought this would be hilarious).

Cambridge online Dictionary: ‘Handbag, a bag, often with a handle or a strap going over the shoulder, used esp. by women for carrying money, keys, and small personal items such as makeup; purse’.

Don't do it, it's a trick
Andrea Sinclair

PS: Smoodging entire historical cultures together that range from 9000 BC to 1100 AD is seriously just plain sloppy.