The griffin bracelet of prince Psar

This is a good example of why I trust no-one,
particularly old textbooks from the dawn of archaeology

The colour image below is a reconstruction of a bracelet that was purchased by the Louvre
in the good ol days of European diplomats ravenously collecting antiquities from whomever
was selling in Egypt. (Plus a spot of digging themselves because swashbuckling was very
'in'.)  The image is from E. Prisse d'Avennes 1878, Monuments Egyptiens, Atlas II, V20. 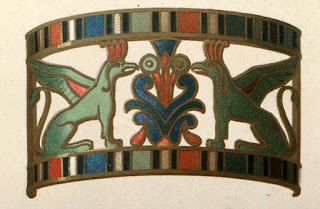 Pretty isn't it?  Rather a pity it is mostly fiction.  These are not the original paste colours
and some of the content is downright wrong.

Below is the same bracelet, but in Goodyear 1891, Grammar of the Lotus (plate 31).
The book where he basically argued that every floral motif from antiquity was based
on the lotus (no really, he did). He wasn't interested in the animals and it looks
suspiciously like the artist just copied the d'Avennes drawing. 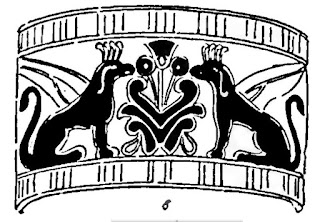 Gaston Maspero from the 1914 Manual of Egyptian Archaeology, and finally more
accurate, but the artist has still embellished minor details.  Clearly this artist visited
the Louvre. 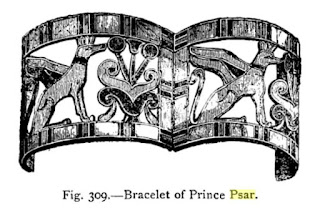 On the upside now the 'griffins' look okay and are facing correctly.

Heading into the mid. Twentieth century with a drawing from Leibovitch 1946-7
'Le Griffon II', fig 12.  Which is quite clumsy and schematic, and this time one
animal has been given a hawk-like head. 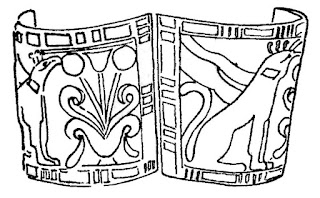 Wishful thinking.  Plus it is a bit like they all desperately wanted the crest to be curls.

Finally, my own drawing of the iconography from the bracelet, using photographs of
the original (but don't trust me either.)

To quote significant other " you do realise dogs can't fly, don't you?"

The birdlike features are not clear now, rather it looks like a dog and the collar reinforces
that impression. This is a fairly stereotypical Seth 'griffin' that occurs in Egyptian art
from the late Second Intermediate Period into the 18th Dynasty.

The 'curls' that they determinedly kept adding to the head were copied from 'griffins' that were also drawn in the 1800s, from the tomb of Ramesses III and a plaque in the Louvre.  However, those
Ramesside griffin crests always face in the other direction.

There is also a pair to this one in the Louvre that has a lion and similar volute plants.

The Psar referred to in early texts is Paser, the 19th Dynasty nobleman,
but this connection is likely to be erroneus. 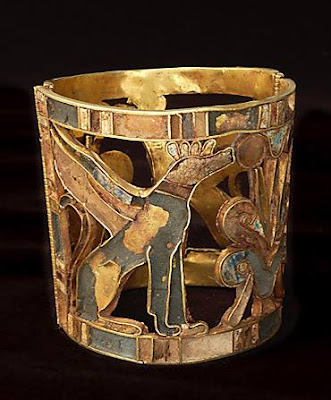 So the lesson from this is:

do not trust old drawings and always go to the original object first.