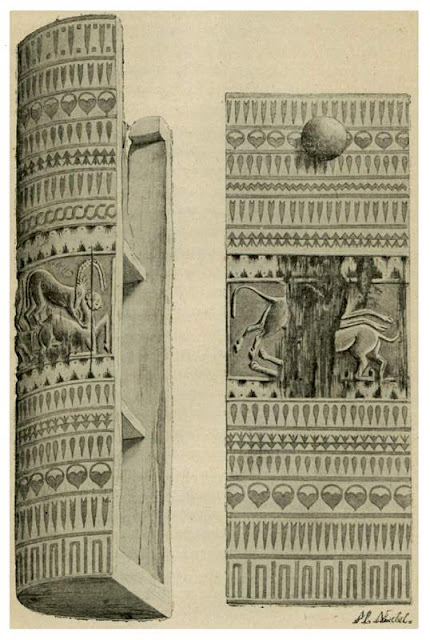 Illustration of the MacGregor box from Naville 1898.

Reverend William MacGregor (1848‒1937) was a British industrialist and antiquities collector during the late 1800s to early 1900s.  He was an active member of the Egyptian Exploration Society and being cashed up and keen he also funded excavations in Egypt. This naturally gave him access to archaeological finds (in the good ol’ days of treasure hunting, sponsors got to keep many of the objects that were found).  But equally the gentleman was an avid collector from other less reputable sources.

His Egyptian collection was set up in a private museum in his mansion in the early 1900s and later dispersed through the dealer Sotheby’s in the early 1920s.  The MacGregor box that is my topic here was at that time sold to a private collector, passing through various hands, ultimately ending up in the Museum of Fine Arts Boston in the USA in 1949.  It has no provenience (excavation history) and therefore no context or date.  Yet it has nonetheless managed to influence academic thought about Egyptian art.

Below is a drawing of this cosmetic box from Reverend MacGregor’s collection from an article by Edouard Naville in 1898‚ ‘Une boite de style Mycénien trouvée en Égypt’.  As you can tell by the title, the article argued that this box was carved in Mycenaean style, yet it was purchased in Egypt.  For your random piece of useless info. the article was written before Arthur Evans reinvented the Minoans… oops, I mean rediscovered the Minoans while excavating Knossos.  So everything ‘Aegean’ was thought to be Mycenaean then due to the activities of Schliemann and co. at Mycenae.  The cultural attribution is therefore disputable.

The object is an Egyptian type of wooden semi-circular cosmetic or toiletry box, which were popular in high status tombs in Egypt in the New Kingdom.  This one has quite an elaborate decoration cut in relief with intricate ornamental bands that frame a figural vignette of frolicking animals.  It shows three predators, two lions and a domestic dog, attacking three desert animals, an antelope?, a steer and an ibex.  This is in fact a reasonably common motif on these boxes in the 18th Dynasty in Egypt.

Please note the pedestal under the rear leg of the lion on the right … odd no?

Illustration of the MacGregor box from Naville 1898.

The next image is the same MacGregor box from an article in the 1940s by Helene Kantor on artistic exchange between ancient Egypt and the Aegean during the 2nd millennium.  Her drawing is basically a line drawing copied from the Naville article image that she credits to the Sotheby’s sale catalogue.  Which is fine, really, we all need drawings for our publications.   The problem here is that she did not look at the real box (which was in a private collection at that time) and used a drawing taken from the sale catalogue.  But by doing this she has perpetuated a myth about Egyptian art by repeating the error in the earlier drawing.

Kantor 1947, page 70-71
“Dangling feet, such as those possessed by dogs of Puimre (...) and the Amenemhet who built Tomb 53 (…) were no longer acceptable, as is demonstrated on an ointment box, formerly in the MacGregor collection, which must be dated to the reign of Tutankhamun (…). Here the artist has been forced to adopt a curious expedient in order to provide the attacking panther with a firm footing. Under the one leg that does not rest upon the falling ibex a t-shaped support has been placed. The metamorphosis of the dynamic group on the Mahirper collar (…) into the static unit on the MacGregor box (…) is eloquent evidence for the enduring nature of native Egyptian traditions.”

As you can see the box and its error were used by Helene Kantor to argue that 18th Dynasty artists were uncomfortable with having no ground-line in their figural scenes.  While Egyptian art became more impressionistic and mobile (reputedly under the influence of Aegean art) in the 18th Dynasty, she argued that Egyptian artists were so uncomfortable with this idea that their conservatism crept back in at the end of the 18th Dynasty, around the reign of Tutankhamen.  This box and a dagger sheath from Tutankhamen were used as her visual evidence for this knee-jerk return to traditional Egyptian artistic conservatism.  The idea is that an Egyptian artist could not deal with a back paw of a leopard (or lioness) floating in mid air so they placed a pedestal under its foot. 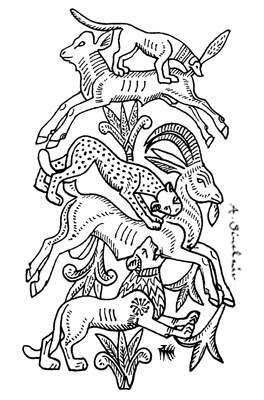 Detail from the sheath of a dagger from the tomb of Tutankhamen.
Drawing by A. Sinclair.

The problem is that in reality there is no pedestal under the right hind paw of the leopard on the MacGregor Box, instead the vertical rod-like thing is in fact the extension of its tail and s/he is more or less floating too, just like for the lion, the hunting dog, calf and the antelopes …  Although it is not uncommon for these scenes the lion/leopard or dog to have its paws on the antelopes rump when it stands above it.  But this posture nonetheless still won’t be terribly naturalistic.  On the dagger sheath from the tomb of Tutankhamen that she uses to situate her date for the return to conservatism there is also no groundline and all figures float alike.

However, apart from the inaccuracy, this claim that the original Egyptian sculptor put a pedestal under the back foot of the lion because of mobility issues is entirely arbitrary and ignores that there are no pedestals under any other figure, like the calf or the dog in the scene, and that the other animals do tend to float with often only nominal reference to the groundline.  But disregarding that awkward oversight, the pedestal is simply not there.

Do not get me wrong.  I am in awe of Helene Kantor as a scholar.  Her knowledge of iconography for her time was impressive (during and post WWII) and taking into account the level of accumulated knowledge in archaeology, plus her having no access to Egyptian and European collections.  The problem is that her thesis that Egyptian painters and sculptors could not deal with mobility has stuck around and academics are still turning to the 1947 paper for discussions of Egyptian-Aegean cultural interconnections (we read it as undergrads).  In addition the date given to this box today still follows her lead.

Even though, as far back as the 1950s William Stevenson Smith pointed out the original error in his own paper on this box.  Which was easy for him, as he was curator of the Boston museum at that time...  He was actually looking at it…  While he went so far as to cite Mycenaean ceramic from tombs that have similar boxes from Sedment (inferring objects may equal actual Mycenaean people, which is incidentally equally dodgy), he also pointed out the error in the drawing and disagreed with her conclusions. 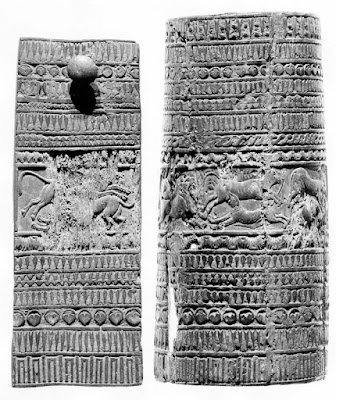 Photograph of the box from Smith 1952.


But, all the same, this assumption has endured.  Partly because, if you only refer to Egyptian monumental art and ignore the small stuff, it works as a bald generalisation most of the time.  If however, you look at 18th Dynasty Egyptian decorative art, particularly at objects like boxes, or bowls and vases, the rationale that Egyptian craftsmen could not handle mobility or ‘floaty’ animals and reverted back in defiance absolutely does not work.  They adjusted their image to take into account scale and spatial issues.  And in the 18th Dynasty they made an art of it.

The other problem that I have with this series of old drawings is that because copyright restrictions are (justifiably) quite rigid to protect artists and publishers, it is not unlikely to find that an academic will use an early image to avoid copyright complications in their publications today.  But the use of old drawings has risks that are more than apparent from my posts now and then here in this blog.  Old archaeological drawings are often faulty and misleading.

The same criticism applies to the conclusions that are then drawn from them.  To add insult to injury, you must also factor in that today very out of date academic research is much more likely to be freely available to the public to read and download on the internet than current academic research. This then facilitates the spread of outdated and faulty theories in the media and on the internet. 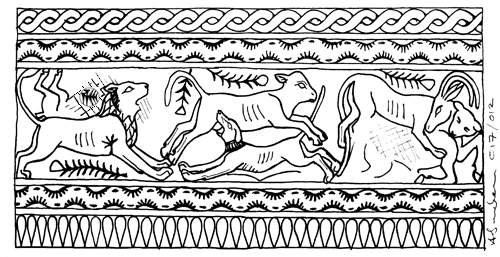 Line drawing of the decoration of the box by A. Sinclair 2017.

Above is my drawing of the decoration of the box, inclusive of some of the ornamental bands…  But again …  Do not assume mine is absolutely correct either, I draw for content, not for photographic accuracy.