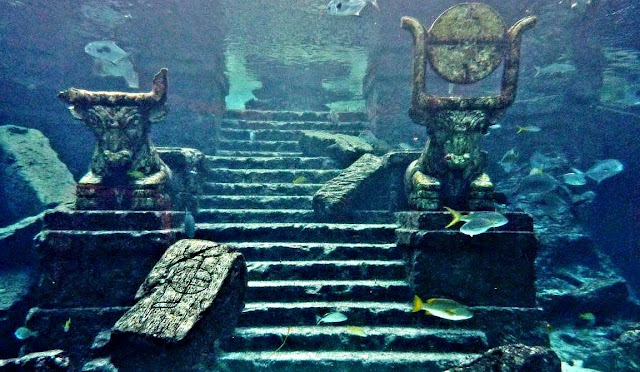 Every so often internet pages devoted to the ancient world will have a run on posts about the recently excavated marine archaeology sites from , Heracleion and in northern .   And it is understandable to a degree, as it is possible to slip related words like “Cleopatra” and “mysterious sunken treasure” into your clickbait headlines and from this get very productive results from your audience.

But, just to be clear, this is a fabulous and interesting topic, and the excavator of these sites, Franck Goddio, has a very good web page with some equally good images, that have also been taken out of context and used indiscriminately on the web, but at least these are legit images, with interesting information at the source. You can find them here: http://www.franckgoddio.org/projects/sunken-civilizations/introduction.html

The problem is that a group of photographs from unrelated modern marine parks have become hallmarks of these posts on web pages, and these false photos are casually mixed in with images taken from the excavation web page, sometimes in greater volume than the real photos.

My post today is basically the outcome of a new round of this nonsense occurring on the web and my deciding that I need to have a file with links to the sources debunking these images.  And then I thought why not create a blog post with the links instead.  As that is convenient for me to find when I need it, as well as for others.

But before we go in, it is probably worth pointing out that the images that follow are not just used for ancient . Rather, basically any whacky claim about underwater ruins or Atlantis being discovered may use one of these images, regardless of whether it is in the Pacific Ocean, , , the Atlantic Ocean or the .  These images are in fact legion in the tin hat wearing and touristy clickbait realms.  A quick image search on Google will support this statement. 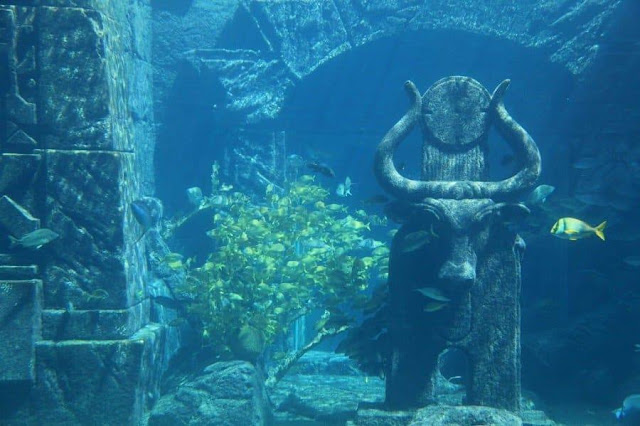 1.  Bull statues in some sort of underwater temple complex.

Culturally speaking these bulls are complete non-entities, as they do not appear to have been modelled on any ancient culture.  To describe them as ancient Egyptian involves having no awareness of Egyptian artistic style and assuming that because it is a bovine head with horns and a disk between them that it must be Egyptian.

But here’s the thing, the horns are distorted into the wrong shape and the disk is too small for Egypt.  I also have no idea what the object under the disk is intended to be.  The body of the bull itself is rectangular and has corners … so not an Egyptian thing.  They actually liked their cows with curves.  Finally the architecture in the background resembles no ancient culture, it is just schematic and vague, and, pro tip, the ancient Egyptians did not build with arches, the Romans did, but that is stretching the point..

Also,  aquarium fish photoshopped into an image do not prove it is the ocean.  Although to be honest, this whole image looks like it was produced in a computer program.  The top image looks like the outcome of the same design process.

The source appears to be:
Diving park at a proposed whizz bang holiday resort in the : Reef Atlantis
http://ownthereef.com/atlantis-access/activities/marine-habitat 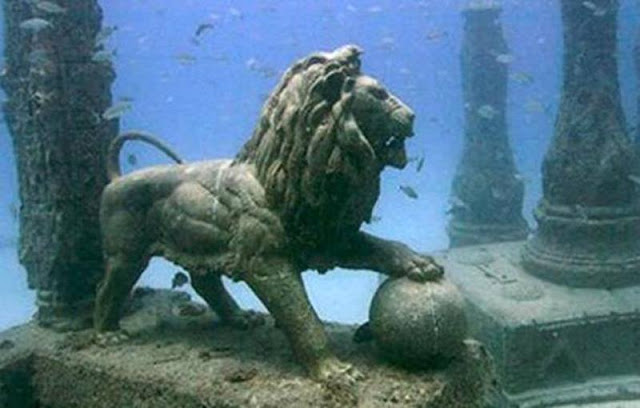 2.  Classical looking lion with columns in the background.

Or should I say, neo-classical style lion with his paw on a globe and some columns in the background.   This guy would look appropriate propping up the entrance to a city court building or library anywhere in today.  However, he would not fit a temple entrance in Egypt 2000 years ago. The Egyptians liked their lions seated, and if standing in that rather arrogant pose, they preferred a traditional enemy’s head under the front paw… it says so much more …  A globe was the symbol of the sun god, it does not get dominated, that would not be cool or respectful.  Again the columns in the background resemble no specific ancient Mediterranean cultural style, because they don’t need to, it is a holiday park. 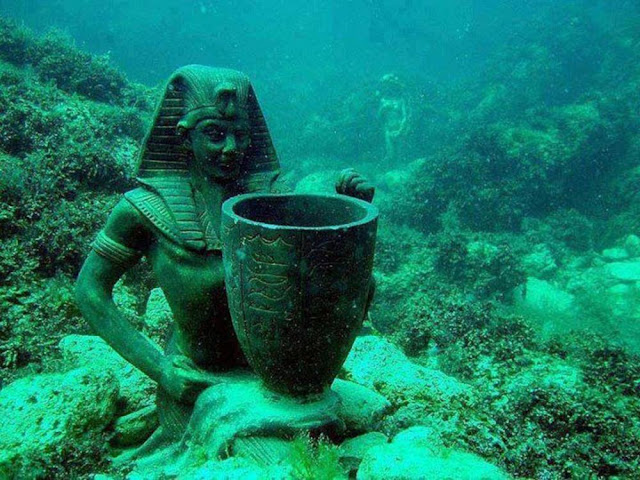 3.  Pharaoh with large pot
What is wrong with this picture? … As it turns out … rather a lot.

First of all, a statue of Botticelli’s Venus is in the background.  Now the original Venus by Botticelli is part of a very famous painting, “The Birth of Venus,“ from the Italian Renaissance.  Look it up.  It is lovely.  It is in fact a historically viral image worthy of the internet age.  One way this figure might occur as a 3 dimensional statue is as a garden decoration that one can purchase from most garden supply centres all over the world.

So that says modern right there.

Then there is the pharaoh with the pot on his lap.  Seriously, where do I start?

The entire figure looks wrong, the details and the modelling are not ancient Egyptian.  A statue of a seated or kneeling king is never, and I am talking ever, shown with a big pot on his lap with a bit of cloth thrown in for style ... wtf ...  it would undermine his whole power over all people and things image.  The proportions are wrong, with the elongated head and crown being just a tad disturbing. The uraeus snake on the crown is a lump and the jewellery he wears looks nothing like jewellery on a real statue.

Then there is the pot, which is not Egyptian type.  In fact it looks more like a planter for flowers.  The hieroglyphs on this pot are cut into the clay, but the ancient Egyptians decorated their ceramic with paint.  They did not cut or drag a sharp instrument over the surface.   Finally the hieroglyphs are ugly, unbalanced and they say… absolutely nothing ... because some signs are made up, some are wrong, primarily because whoever made it had no idea … Again, probably a garden centre statue.

This photo is from an underwater museum at Tarkhankut in (created in 1992) that people are just adding more objects to as it evolves.  So I’m guessing some bright sparks threw in a few garden statues for lols.
http://www.amusingplanet.com/2016/01/underwater-museum-at-cape-tarkhankut.html

End
Beyond these three or four hackneyed internet misrepresentations that are used for the marine excavations in , there are a plethora of photos that come up if you employ the pseudo-science trigger word “Atlantis”, and “underwater”, many of which again are from modern marine parks and resort aquariums.  In particular, the Lost Chambers aquarium at the Atlantis Hotel in turns up everywhere, because the publicity dept for that project threw in some effort and cash, and produced many, many pretty images which all effectively exploit people’s passion for the past.

Then the internet came along and exploited this just that little bit further. 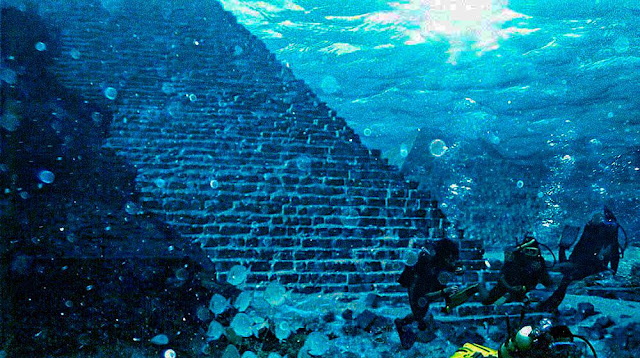 The final image is a given, it is a photograph of the pyramids in Egypt that has been photoshopped to within an inch of its life.  There is nothing real to see here.

And to those sensible people reading this post and scratching their heads, because seriously how could anyone looking at these photographs make this mistake, regardless of an extensive knowledge of ancient artistic architecture and art, or none.  They can, and they do, and they can be quite abusive towards you if you suggest otherwise.

So, because I was sick of trying to look up this information after every encounter over the last 5 years, I wrote this piece …