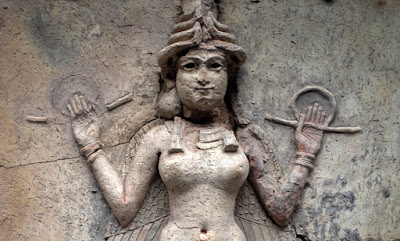 The Queen of the Night Plaque. The identity of this goddess is disputed. Image Paul Hudson at Wikipedia

Which came first, the goddess or the egg?

You know how it is, one day you are minding your own business searching the darker corners of the internet for quotes from fringe publications on the ancient Egyptians using magic mushrooms in their secret rituals (they didn’t btw).  And in a particularly looney publication you stumble upon a possible recent source for the Easter is Ishtar meme.

A meme that has resurfaced endlessly basically since social networks went mainstream.

I assume most readers will be aware of it, for those who have lived under a rock for the last ten years I provide an image of the most common version.  It has in the past been very popular among various factions of the alternative scene, particularly neo-pagans, because, if nothing else, it justifies our penchant for chocolate eggs and sweet buns. 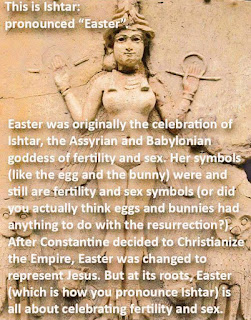 When I created this blog over 3 years ago I toyed with the idea of writing this meme up as a blog post, but I came to the conclusion that it had been adequately handled by other highly capable people, and there was no need to add my 2 cents worth, mainly because while I knew it was bollocks, I could not work out where this very odd myth might have begun, apart from suspecting an out of date text.

One Easter a few years ago I became irritated enough (after an argument with a Sumerian revival pagan), and made a vague effort that resulted in a simple meme thrown together in photoshop using a drawing of mine that was a summary of the complex nature of the Mesopotamian goddess Inana-Ishtar … something I could dust off at Easter … then I walked away.

And a large percentage of the internet seemed to also get the point after that and interest dropped off. 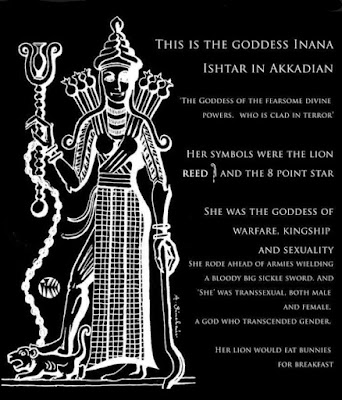 That is until recently, when the bunnies, eggs and Ishtar myth landed unexpectedly in my lap and within 24 hours I knew where the source material was, and who wrote it….

And I honestly could not walk away, it is comedy gold … with a healthy dash of *facepalm*.

More than this it is a superb illustration of manipulation and misinformation, how something with very questionable motives (as fringe religious and/or alien conspiracy theory) can be dressed up on the internet as a feel-good narrative that then captures a much wider audience …

But most of all it reinforces my pet peeve that I bang on endlessly about here - do not trust out of date textbooks, and equally - do not trust people who cite these in publications today (I am pretty confident I don’t need to tell you not to trust everything you see on the internet).

A telephone game with fire and brimstone, and chocolate eggs

On that fateful day I found this: 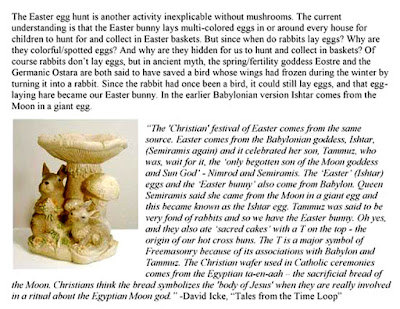 Eric Dubay 2009 The Atlantean Conspiracy - Exposing the Illuminati from Atlantis to Zion (yours for around $30.00+ anywhere), page 264.

Eric Dubay is a relatively well known American flat earth conspiracist, holocaust denier and Nazi apologist. I wouldn’t rush to recommend his writing prowess, as if you removed the many paragraphs throughout this text quoting other fringe authors the book would be a brochure.  The chapter in question is basically the love child of David Icke and James Arthur.

Arthur however, while sort of being responsible for my discovering this whole schemozzle leaves us now, he’s crazy in the - all cool gods are Santa Claus and hallucinogenic mushrooms - way, but not in the Ishtar and bunnies way.

If you don’t know who David Icke is, I shall try to summarise him and his theories briefly: he is a well known British ex-football celebrity and anti-Semite who has made a very lucrative career by publishing numerous books on the theme of ‘the world is run by a secret cabal of baby eating shape-shifting lizards’… Yeh, that guy.

David Icke 2003 Tales from the Time Loop: The Most Comprehensive expose of the Global Conspiracy ever Written and all You Need to Know to be Truly Free (yours for only around $35.00+ anywhere), pages 243-4.

Icke is very sparse on his sources, although for alien theory he naturally exploits Zecharia Sitchin. For the ancient Near East he mostly relies on a dreadful book by amateur Assyriologist Laurence Waddell (1929) that was canned by Assyriologists on publication, and claims all the great ‘Aryan’ civilisations are descended from the Sumerians (inclusive of ancient Egypt). Again, generous touches of classic fascist race rhetoric and colonialism.

However, for the Easter and Ishtar trope Icke cites himself, from 1999, The Biggest Secret: The Book that Will Change the World, (above from page 54), but it is pretty clear from both books where he got his rather unique claims…. Seriously, alarm bells should start ringing at Tammuz being the son of Semiramis (he wasn't). 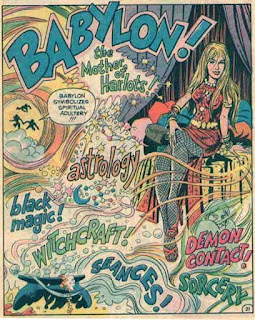 When I first read these excerpts from what are basically oddball Christian sects I could not easily get the voice of my grandmother out of my head, who many years ago on congratulating me on my pending nuptials (to a man sporting the name Mohamed) then lectured me sternly on our family’s particular brand of Christianity and how all Catholics were evil…..

But back to business – in the 1960s American evangelists Ralph Woodrow and Herbert Armstrong both published fire and brimstone, the apocalypse is nigh, pieces that spread widely presumably at least partially in a response to the licentiousness of the growing mainstream hippy and pagan scene that they no doubt perceived as evidence of the downfall of America and of mankind.

American television and radio evangelist, founder of the Worldwide Church of God, Herb believed WWIII, the second coming and apocalypse were imminent in the 1970s and that the Catholic church was the Whore of Babylon of the Book of Revelation.  I could go on, but why not simply read the article in all its horrendous glory here.

Ralph Woodrow, evangelist and author wrote Babylon Mystery Religion: Ancient and Modern in 1966. In this he devotes an entire chapter to Easter and the pagan origins of the Spring festival, like Armstrong this is inclusive of Ishtar, Astarte, eggs, Semiramis, Nimrod and Tammuz (pages 142-148).

Only one of these gentlemen, Woodrow, later retracted his publication and published a revised critique after discovering that the source he had used to build his argument had fabricated most of his information, however, this was after he himself had sold hundreds of thousands of copies to the willing public, and in fact it is still possible to easily obtain a copy of the retracted book today (yours for only $10.00+ everywhere).  Therefore the damage is done.

Which brings us to the book that is the source of all this nonsense and that served as a foundation text for many hard core American Christian groups in the 20th century: 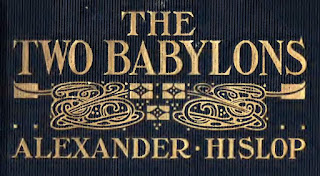 Alexander Hislop - The Two Babylons: On Papal Worship Proved to be the Worship of Nimrod and His Wife

(Available to you for only $10.00+ practically anywhere).

This book was published in 1858 by Hislop, a minister of the Scottish Free Church (Evangelical Presbyterian), at a time when knowledge of ancient Near Eastern culture in western academia was mostly modelled on Biblical and Classical sources, because they had little else to go by.

In 1858 cuneiform (the script of the ancient Near East) had only just been deciphered and excavations in the region were in their infancy, with images of Layard’s finds from the Assyrian palaces at Nineveh and Nimrud as representative of the famous examples of archaeology available to the general public.

Because of this, Hislop took the Bible and a couple of Classical writers at face value (Herodotus, Lucian, Diodorus Siculus), thumbed through Layard’s 2 big picture books and then made stuff up that incidentally suited his religious position (you know it by now - all Catholics are evil).

The source of the egg and 'Ishtar' myth - a Roman mythographer from the 1st century CE, Hyginus

In this book he claimed that the Catholic faith was the whore of Babylon and directly descended from the promiscuous cult of Babylonian goddess Semiramis and her resurrected son Tammuz. He devotes a chapter to Easter (pages 103-113) equating the name with both Ishtar and Astarte. For the significance of eggs in her cult he cites Hyginus (above), and claims that eggs, doves and fish were symbols of Semiramis.

The only thing missing is the bunnies (because they may well be an invention of the 19th century).

It probably ought to be emphasised here that historically speaking it is all uninformed nonsense, but that has not stopped Hislop's book from being republished uncounted times over the past 160 years, and influencing multiple generations of fundamentalist Protestants, including my gran. 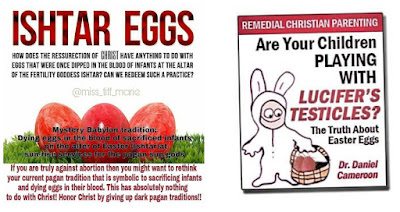 To sum up, the source of this internet meme is a rabid mid 19th century Scottish clergyman who had serious issues with the Catholic church and 'Papists', this fervour is passed on to 20th century Protestants and then elaborated somewhat… somewhere around the end of the 20th century similarly paranoid conspiracy theorists who just happen to be anti-Semites adopted the model to suit their ‘evil aliens rule us now’ objectives…

Then in the 21st century the internet turns this into an easily digested viral meme.

So, there you have it – the source of the Ishtar is Easter/Eostre meme is not just complete fiction, it is a spectacular illustration of why you should be critical of casual feel-good information that is bandied about on the internet (and its motives), and why out of date literature must be eyed with extreme caution… it really could bite you on the arse.

PS: I may never be able to look at 19th century paintings of Semiramis in the same way. 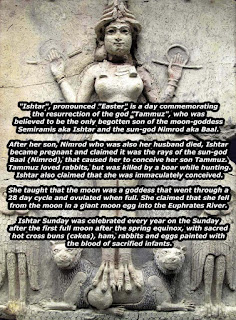 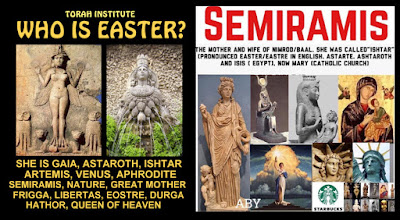 And yet more Bullshit memes related to this topic, they are legion on the net

Lewis, M. 2019. Mesopotamian Pseudoarchaeology, or, "You Clearly Have No Clue What You're Talking About", at What's Up Archaeology - https://whatsuparchaeology.wordpress.com/2019/04/23/mesopotamian-pseudoarchaeology-or-you-clearly-have-no-clue-what-youre-talking-about/

The Belle Jar 2013. 'Easter is not Named after Ishtar and Other Truths I Have to Tell You', - https://bellejar.ca/2013/03/28/easter-is-not-named-after-ishtar-and-other-truths-i-have-to-tell-you/

Waddell, L. 1929. The Makers of Civilization in Race and History, Showing the Rise of the Aryans or Sumerians, Their Origination and Propagation of Civilization, Their Extension of it to Egypt and Crete, Personalities and Achievements of their Kings, Historical Origins of Mythic Gods and Heroes… I ran out of interest here, I mean you get the gist by now ... Delhi.